END_OF_DOCUMENT_TOKEN_TO_BE_REPLACED

Thanks to Richard's last contribution, we now have a nice schematics for the first version of Jaluino board, and very clean and easy to build PCB.

Jaluino is aimed to be a clone of Arduino, but PIC-based, and powered by jalv2 & jallib. The purpose is to share a common hardware configuration, on top of which one can add different features and capabilities, thanks to shields (daughter boards). Ala Arduino...

This post is to give an overview of how to build it, but with not so much details. If you want to build it, you'll have to be familiar with PCB creation.

So, here we go ! First of all, you can find all schematics, PCB and many more details in jallib SVN repository, under "/project/jaluino" directory.

Here's the schematic, but have a look at the PDF file for a more detailed one: 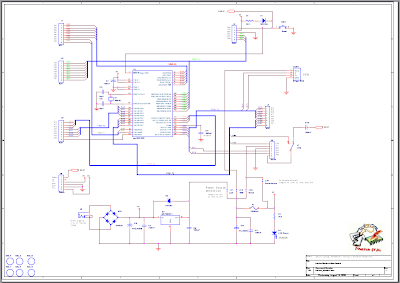 The PCB is surprisingly very simple (thanks Richard !), and thus very to easy to build: 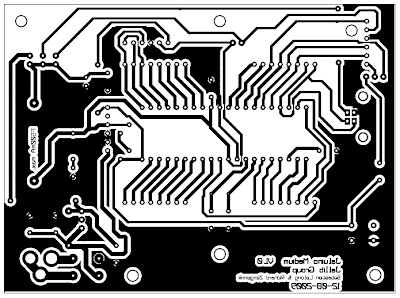 Don't print and use this image ! Use the PDF file here, and print it at scale 1:1, that is, without any zoom-out or zoom-in correction. If any doubt, once printed, put the microcontroller support on the paper (or the like) and check all pins perfectly fit all holes. 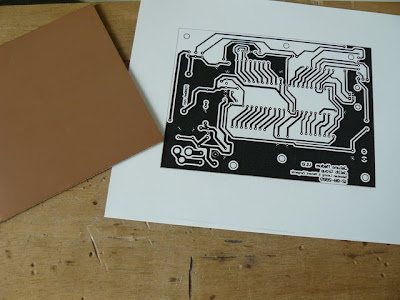 As said, PCB creation is easy. I use the toner transfert method, using glossy photo laser paper (dedicated to laser printer, not ink-jet). If interested, have a look at this post, explaining how to do this, step by step, with a video. 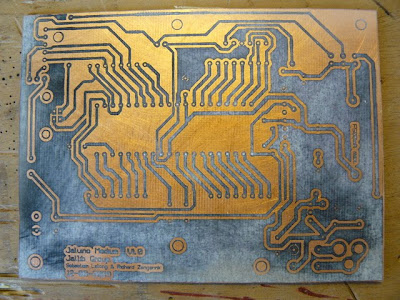 Once the transfert is done, the PCB is ready to be etched. 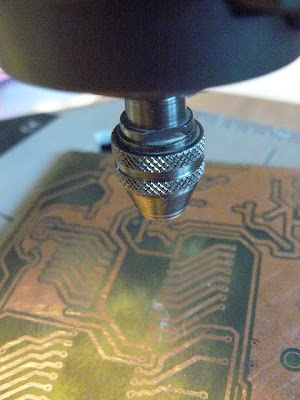 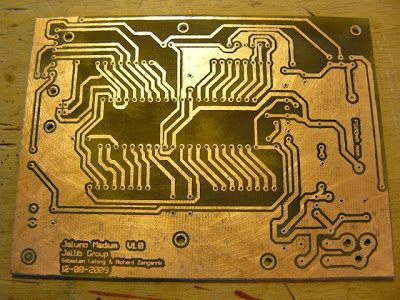 PCB is ready for soldering 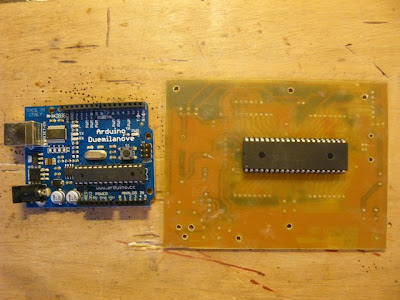 A brief comparison between original Arduino and Jaluino. Jaluino is obsviously bigger, but embed a much bigger chip, and most importantly is made homebrew!

I try to start soldering components from the smaller & lower ones, to the biggest and taller ones. We'll follow this component diagram, provided in PCB PDF file (page 2). 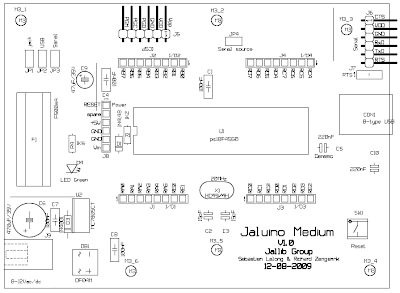 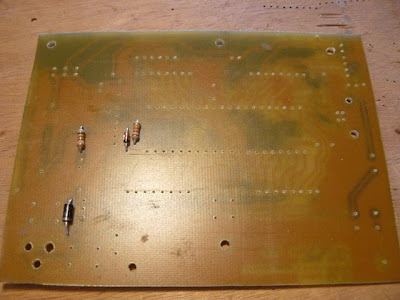 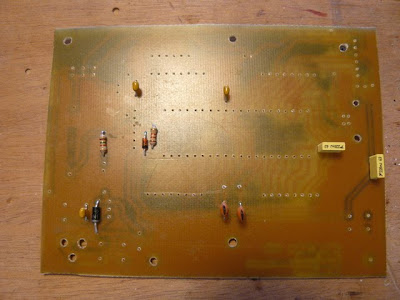 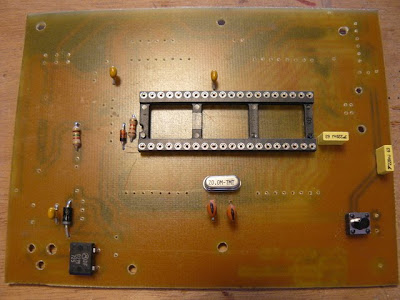 Place microcontroller support, quartz, pushbutton and bridge rectifier (I used a DF02M instead of DF04M) 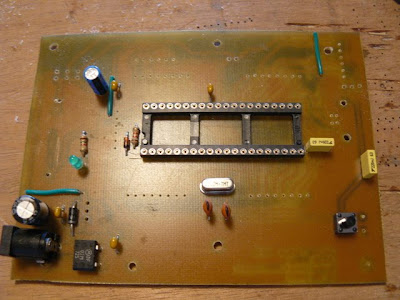 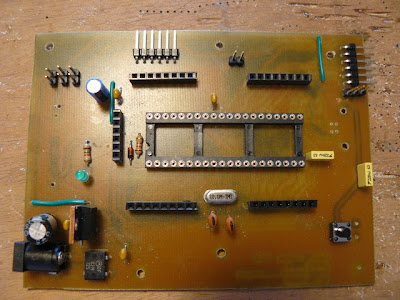 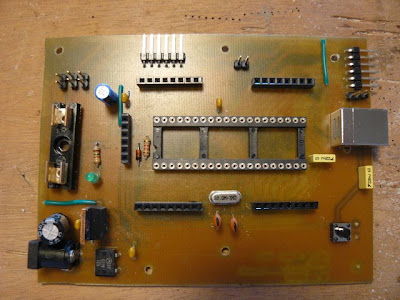 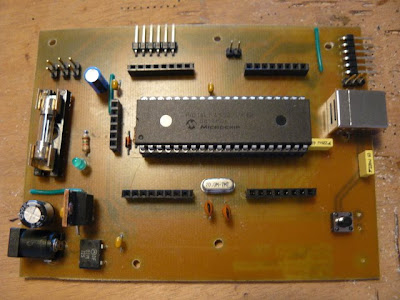 Place your favorite 18F4550 onto the support, and don't forget the fuse ! You're done, kudos ! 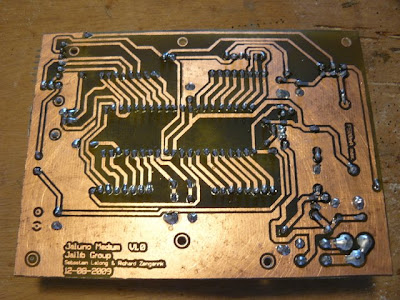 Now here's a brief map showing the different features coming with this board. 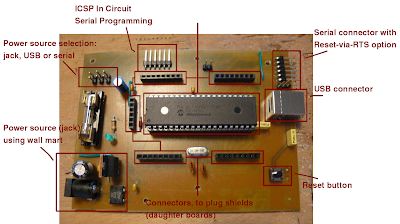 Note: one important missing feature is I²C support, which surely will come in the next version.

I already tried quite few things with this board: In Circuit Programming using XWisp648, blinking a LED (of course), UART using serial connector, with tinybootloader and testing Reset-via-RTS feature (great), and USB-to-serial ! In the next post, I'll try to describe these experiments one by one.

Another important thing, if not the crucial one, is how big should a shield board must be. Current shield connectors configuration gives a surface closed to Arduino's (only considering the surface between connectors, not the whole board). It it enough ? Should a shield board be bigger ? Now imagine this board is doubled-sided, built through a professional process (and thus available as a commercial product). How much smaller would it be ? Will current connectors configuration be valid ? This is a very important thing, because from this is derived all the shield compatibility. If one builds a shield for this Jaluino v1.0, and shield connectors gets changed, this shield will have to be adapted and rebuilt...

And about shields, now the time has come to design a development shield, providing (more or less) basic features. This shield could be used to learn jalv2 & jallib. I was thinking about having:

But maybe that's a little bit too much for single shield...

I am a student of the Technological University of Paraná Federal (UTFPR) and I was very interressado the project since I could use it on some projects at the university.

But I am not able to register in the forum nor download files to manufacture the board Jaluino Medium.

Can you help me?

Hi I have huge troubles with forums (spam) please join jaluino google group and I'll try to help you.